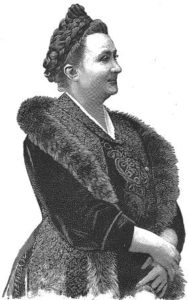 Born Madeleine Gebelin, she told in the Medical Chronicle on 1 April 1895 how her medical career was born - "I was barely eight years old when my father, who was a wheelwright by trade - it is not a silly job - drove me to the sisters' home where he carried out his work..." In the hospital of Nîmes, one nun took an affection to her and taught her some small procedures, such as the preparation of herbal teas and poultices.

She was twelve when the Gebelin family left for Paris, and only fifteen and one month when she married Adrien-Stéphane Brès, a tram conductor. Thanks to the efforts of Julie-Victoire Daubié, French degrees became open to women since 1861. She first had to obtain the consent of her husband, as at the time French law judged married women to be the legal responsibility of their husbands. In 1866, she presented herself to the Dean of the Faculty of Medicine in Paris, Charles Adolphe Wurtz, and asked him for permission to enroll to study medicine. The latter announced that he would do it, but on the condition that she first obtained a degree in Arts and Sciences—a task which she accomplished in three years. She presented herself again to the Dean of the Faculty of Medicine at the University of Paris and remarked to him that nothing now opposed her enrollment in the medical course, and that there were three female foreigners - the American Mary Putnam, the Russian Catherine Gontcharoff and the English Elizabeth Garrett Anderson - were holders of nationally known equivalent degrees. She finally obtained the right to study the medicine course at the faculty.

The dean's decision was met with opposition from the university and medical community. The doctor Henri Montanier wrote in 1868 in the Hospitals Gazette "to make a woman a doctor, it is necessary to make her lose her sensitivity, her timidity, her modesty, harden her to the sight of the most horrible and frightening things. When the woman arrives at that, I ask myself, what remains of the woman? A being who is no longer either a young girl nor a woman; neither a wife, nor a mother." It is difficult to be more eloquent in closing, with the help of misogynistic arguments, the doors of medicine to women.

Despite his personal endorsement, the Dean Würtz took this application to the Minister of Education, Victor Duruy, who approved the acceptance of Brès, but pre-emptively brought the matter to the Council of Ministers. The Empress Eugénie who, referring to the law passed on 10 March 1803 proclaiming the freedom of the job, advocated for Madeleine Brès to be accepted. Finally, after deliberation by the Council of Ministers, Brès was accepted to enroll to study medicine. Brès was by then 26 years old, mother to three children; the mayor of the Ve district received the consent of her husband and she became a medical student in 1869 in the service of Professor Broca at Mercy Hospital.

With the Franco-Prussian War and the departure of a number of the hospitals' doctors for the front, she was named, at the proposal of Professor Broca, temporary intern until July 1871. Strengthened by her experience as a temporary intern, Madeleine Brès decided to pursue a hospital career and sat the external exams, then the internal. Despite the support of Professor Broca, the director of the hospital's Public Assistance publicly refused her this possibility on 21 December 1871.

Eventually, Madeleine Brès decided against further pursuit of a hospital job. Widowed, she was the single mother of three children. She decided to become a pediatrist and to move to the city. She prepared her thesis in the laboratory of Professor Würtz and, on 3 June 1875, produced it on the subject Of Breasts and Breastfeeding. She received honors on her thesis and became the first French woman to be a Doctor in medicine. This thesis wrote in its desired specialty about everything related to the relationship between the mother and her baby, as well as the hygiene of young children. Technically, she was not the first woman to obtain a doctorate of medicine in France - the Englishwoman Elizabeth Garrett Anderson had been ahead of her by five years.

During her career, she worked as a professor of hygiene and taught headmistresses of nursery schools in the city of Paris. She headed the journal Hygiene of the Woman and the Child, and was the author of several childcare books. On a mission for the Internal Minister, she left for Switzerland to study the organization and function of crèches. On 28 May 1893, the first crèche in France was opened by Théophile Roussel, on Nollet Road, in the Batignolles district.