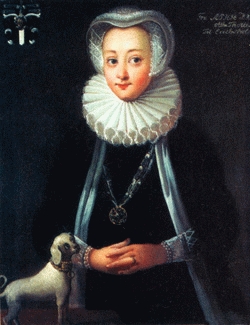 Main achievements: Astronomical observations together with her brother Tycho Brahe

Sophie Brahe, also known as Sophia Thott, was a Danish horticulturalist and student of astronomy, chemistry, and medicine, best known for assisting her brother Tycho Brahe with his astronomical observations.

She was born in Knudsturp, as the youngest of ten children, to Otte Brahe rigsråd, or advisor to the King of Denmark; and Beate Bille Brahe, leader of the royal household for Queen Sophie. Famous astronomer Tycho Brahe, 10 years her senior, was Sophie's oldest brother. When she was 17, she started assisting her brother with his astronomical observations in 1573, and helped him with the work that became the basis for modern planetary orbit predictions. She frequently visited his observatory Uranienborg, on the then-Danish island of Hveen. Tycho wrote that he had trained her in horticulture and chemistry, but he told her not to study astronomy. He expressed with pride that she learned astronomy on her own, studying books in German, and having Latin books translated with her own money so that she could also study them (Tjørnum). Brother and sister were united by their work in science, and by their family's opposition to science as an appropriate activity for members of the aristocracy. Tycho referred with admiration to her 'animus invictus', her "determined mind" (Det Kongelige Bibliotek). She married Otto Thott in 1576, when she was 19 or 20 and he was 33. She had one child with him before he died on 23 March 1588. Their son was Tage Thott, born in 1580.

Upon her husband's death, Sophie Thott managed his property in Ericksholm, running the estate to keep it profitable until her son came of age. During this time, she also became a horticulturalist, in addition to her studies in chemistry and medicine. The gardens she created in Ericksholm were said to be exceptional. Sophie was particularly interested in studying chemistry and medicine according to Paracelsus, in which small doses of poison might serve as strong medicines. She also helped her brother with producing horoscopes, continuing with that until 1597 (Det Kongelige Biblioteck).

On 21 July 1587, King Frederick II of Denmark signed a document transferring to Sophia Brahe title of Årup farm in what is now Sweden. During the times she visited at Uranienborg, Sophia Thott met Erik Lange, a nobleman who studied alchemy. In 1590, Sophie took 13 visits to Uranienborg, and they became engaged in that year. Lange used up most of his fortune with alchemy experiments, so their marriage was delayed some years while he avoided his debtors and traveled to Germany to try to find patrons for his work. Tycho Brahe wrote the poem "Urania Titani" during the couple's separation, expressed as a letter from his sister Sophia to her fiance in 1594. In 1599, she visited Lange in Hamburg, but they did not marry until 1602 in Eckenförde. They lived in this town for a while in extreme poverty. Sophie wrote a long letter to her sister Margrethe Brahe, describing having to wear stockings with holes in them for her wedding. Lange's wedding clothes had to be returned to the pawn shop after the wedding, because the couple could not afford to keep them. She expressed anger with her family for not accepting her science studies, and for depriving her of money owed to her. By 1608, Erik Lange was living in Prague, and he died there in 1613 (Det Kongelige Bibliotek). Sophie Brahe personally financed the restoration of the local church, Ivetofta kyrka. She planned to be buried there, and the lid for her unused sarcophagus remains in the church's armory (Svensson, et al.). But, by 1616 she had moved back permanently to Denmark and settled in Helsingør. She spent her last years writing up the genealogy of Danish noble families, publishing the first major version in 1626 (there were later additions).

Her work is still considered a major source for early history of Danish nobility (Det Kongelige Bibliotek). She died in Helsingør in the year 1643, and was buried in Kristianstad, in Trefaldighets kyrka, with the Thott family. In 1626 Sophie had completed a 900-page manuscript on the genealogies of 60 Danish noble families, which is held by Lund University. In 1691 Pieter van der Hulst painted a portrait of an old woman named Live Larsdatter; he wrote a note claiming she was born in 1575, and was 116 years old. Sparse sources claimed that Larsdatter worked for Tycho in Denmark, and later for Sophie, who taught her medicine. Larsdatter was variously said to have lived to 123 or 124 years and to have become known for her "miracle plaster".