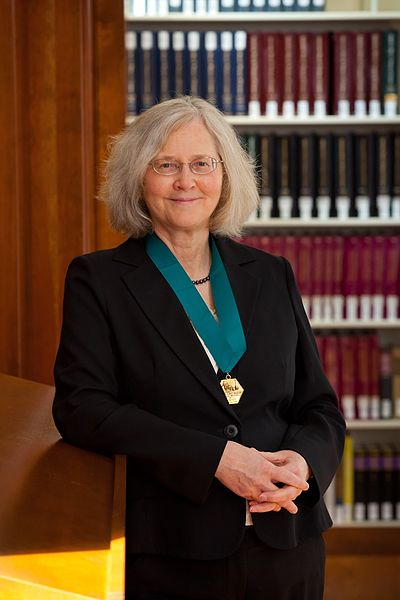 Born: 1948 in Tasmania (Australia)
Nobel Prize in Physiology or Medicine in 2009

Main achievements: Discovered of the enzyme that replenishes the telomere.

Professor Elizabeth Helen Blackburn is an Australian-American biological researcher at the University of California, San Francisco, who studies the telomere, a structure at the end of chromosomes that protects the chromosome. Blackburn co-discovered telomerase, the enzyme that replenishes the telomere. For this work, she was awarded the 2009 Nobel Prize in Physiology or Medicine, sharing it with Carol W. Greider and Jack W. Szostak. She also worked in medical ethics, and was controversially dismissed from the Bush Administration's President's Council on Bioethics.

Elizabeth Helen Blackburn was born in Hobart, Tasmania on 26 November 1948. Her family moved to the town of Launceston when she was four, where she attended the Broadland House Church of England Girls' Grammar School (later amalgamated with Launceston Church Grammar School) until the age of sixteen. Upon her family's relocation to Melbourne, she then attended University High School, and ultimately gained very high marks in the end-of-year final statewide matriculation exams. She went on to earn a Bachelor of Science in 1970 and Master of Science in 1972, both from the University of Melbourne and her PhD in 1975 from the University of Cambridge (Darwin College). She then carried out postdoctoral work in molecular and cellular biology between 1975 and 1977 at Yale University.

In 1981, Blackburn joined the faculty of the University of California, Berkeley, in the Department of Molecular Biology. In 1990, she moved across the San Francisco Bay to the Department of Microbiology and Immunology at the University of California, San Francisco, where she served as the Department Chairwoman from 1993 to 1999. Blackburn is currently the Morris Herzstein Professor of Biology and Physiology at UCSF, and a non-resident fellow of the Salk Institute. She is the president-elect of the American Association for Cancer Research.

Blackburn co-discovered telomerase, the enzyme that replenishes the telomere. Blackburn recalls: "Carol had done this experiment, and we stood, just in the lab, and I remember sort of standing there, and she had this – we call it a gel. It's an autoradiogram, because there was trace amounts of radioactivity that were used to develop an image of the separated DNA products of what turned out to be the telomerase enzyme reaction. I don't remember any details in that area, ‘Ah! This could be very big. This looks just right.’ It had a pattern to it. There was a regularity to it. There was something that was not just sort of garbage there, and that was really kind of coming through, even though we look back at it now, we'd say, technically, there was this, that and the other, but it was a pattern shining through, and it just had this sort of sense, ‘Ah! There's something real here.’"

For this work, she was awarded the 2009 Nobel Prize in Physiology or Medicine, sharing it with Carol W. Greider and Jack W. Szostak. In recent years Blackburn and her colleagues have been investigating the effect of stress on telomerase and telomeres with particular emphasis on mindfulness meditation. She is also one of several biologists (and one of two Nobel Prize laureates) in the 1995 science documentary Death by Design/The Life and Times of Life and Times. Studies suggest that chronic psychological stress may accelerate ageing at the cellular level. Intimate partner violence was found to shorten telomere length in formerly abused women versus never abused women, possibly causing poorer overall health and greater morbidity in abused women.