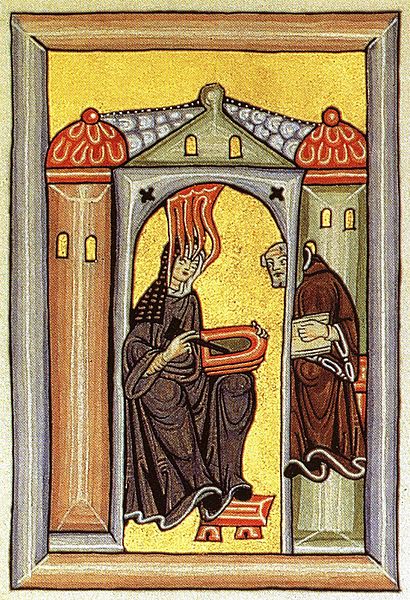 Main achievements: Considered as the founder of scientific natural history in Germany.

Saint Hildegard of Bingen also known as Saint Hildegard, and Sibyl of the Rhine, was a German writer, composer, philosopher, Christian mystic, Benedictine abbess, visionary, and polymath. Elected a magistra by her fellow nuns in 1136, she founded the monasteries of Rupertsberg in 1150 and Eibingen in 1165. One of her works as a composer, the Ordo Virtutum, is an early example of liturgical drama and arguably the oldest surviving morality play.

She wrote theological, botanical and medicinal texts, as well as letters, liturgical songs, and poems, while supervising miniature illuminations in the Rupertsberg manuscript of her first work, Scivias. Although the history of her formal recognition as a saint is complicated, she has been recognized as a saint by parts of the Roman Catholic Church for centuries. On 7 October 2012, Pope Benedict XVI named her a Doctor of the Church. Hildegard's exact date of birth is uncertain.

She was born around the year 1098 to Mechtilde and Hildebert of Bermersheim, a family of the free lower nobility in the service of the Counts of Sponheim. Sickly from birth, Hildegard is traditionally considered their youngest and tenth child, although there are records of seven older siblings. In her Vita, Hildegard states that from a very young age she had experienced visions. Hildegard's works include three great volumes of visionary theology; a variety of musical compositions for use in liturgy, as well as the musical morality play Ordo Virtutum; one of the largest bodies of letters (nearly 400) to survive from the Middle Ages, addressed to correspondents ranging from Popes to Emperors to abbots and abbesses, and including records of many of the sermons she preached in the 1160s and 1170's; two volumes of material on natural medicine and cures; an invented language called the Lingua ignota ("unknown language"); and various minor works, including a gospel commentary and two works of hagiography.

Several manuscripts of her works were produced during her lifetime, including the illustrated Rupertsberg manuscript of her first major work, Scivias (lost since 1945); the Dendermonde manuscript, which contains one version of her musical works; and the Ghent manuscript, which was the first fair-copy made for editing of her final theological work, the Liber Divinorum Operum. At the end of her life, and probably under her initial guidance, all of her works were edited and gathered into the single Riesenkodex manuscript.

Hildegard also wrote Physica, a text on the natural sciences, as well as Causae et Curae. Hildegard of Bingen was well known for her healing powers involving practical application of tinctures, herbs, and precious stones. In both texts Hildegard describes the natural world around her, including the cosmos, animals, plants, stones, and minerals. She combined these elements with a theological notion ultimately derived from Genesis: all things put on earth are for the use of humans. She was particularly interested in the healing properties of plants, animals, and stones, though she also questions God's effect on man's health. One example of her healing powers was curing the blind with the use of Rhine water.