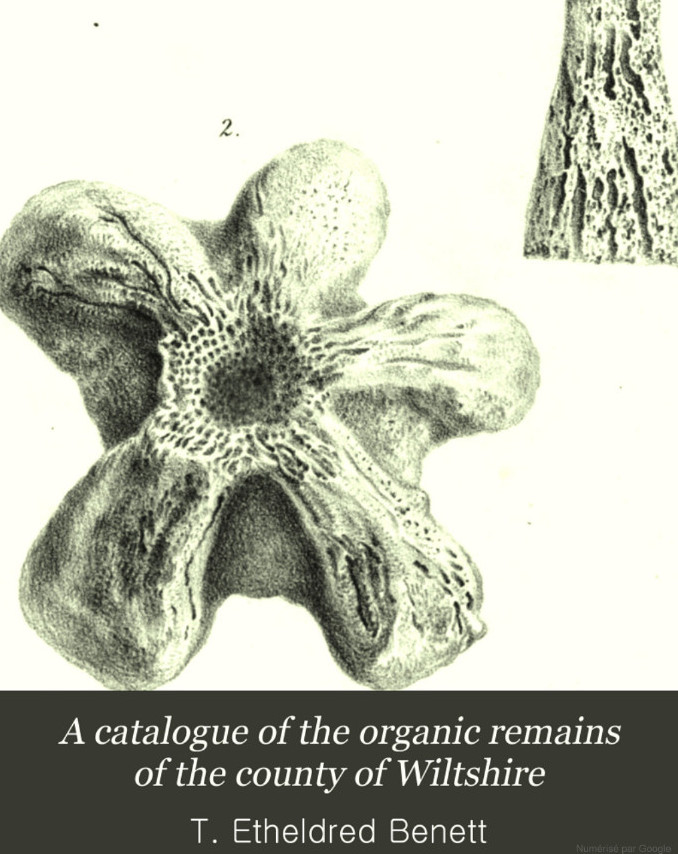 Etheldred Benett was an early English geologist often credited with being the "First Female Geologist", having devoted much of her life to collecting and studying fossils that she discovered in South West England. She worked closely with many principal geologists and her fossil collection, considered one of the largest at the time, played a part in the development of geology as a field of science. Gideon Mantell, discoverer of the Iguanadon, was so inspired by Benett's work he named a Cretaceous ammonite after her called Hoplites bennettiana.

From 1802 she lived at Norton House in Norton Bavant, near Warminster, Wiltshire. Very little is known about Benett’s home life, beyond her contributions to geology, and there is no known portrait of her. From at least 1809 until her death, she devoted herself to collecting and studying the fossils of her native county, beginning with the Warminister area. Benett was knowledgeable in stratigraphy, which aided her searches, and her wealth enabled her to hire collectors and purchase prepared specimens.

Her interest in geology was encouraged by her sister in-law's half brother, the botanist Aylmer Bourke Lambert. Lambert was an avid fossil collector who contributed to James Sowerby’s Mineral Conchology; he was a founding member of the Linnean Society, a member of the Royal Society, and an early member of the Geological Society. It was through him that Benett developed her love of fossils and relationships with many leading geologists of the time, and it is only through works by these men that most references to her work were made. For example, she contributed to Gideon Mantell's work on stratigraphy, and also worked with Sowerby. Benett was unmarried and financially independent, and so was able to dedicate much of her life to the developing field of geology through the collection and study of fossils.

Benett's speciality was in the Middle Cretaceous Upper Greensand in Wiltshire's Vale of Wardour. Her collection was one of the largest and most diverse of its time, resulting in many visitors to her home. Some fossils in her collection were the first to be illustrated and described, whilst some were extremely rare or unusually well preserved. Benett had contact with many authors of fossil works including the Sowerbys. Forty-one of her specimens were included in Sowerby's Mineral Conchology, a major fossil reference work, in which she had the second highest number of contributions. After viewing part of her collection, and assuming she was male, Tsar Nicholas I granted her a Doctorate of Civil Law from the University of St. Petersberg at a time when women were not admitted into higher education institutions. In response to her honorary doctorate, Benett noted that "scientific people in general have a very low opinion of the abilities of my sex."

Most of her fossil collection is currently housed at the Academy of Natural Sciences of Philadelphia after purchase by Thomas Bellerby Wilson. A few items are in British museums, in particular Leeds City Museum, and possibly in St. Petersburg. These collections contain many type specimens and some of the first fossils found with the soft tissues preserved (as recognized shortly after her death).

Benett's entire collection was assumed lost in the early 20th century, as specific specimens could not be located. However, the Philadephia Academy's revived interest in early English fossil collections, and particularly Benett's collection, led to formal recognition again. This ultimately led to the discussion of her two publications, the elaboration of her taxonomic names, and the photographic illustration of many vital pieces of her collection.

Benett also took an interest in conchology and spent time collecting and detailing shells, many of which were new records. In a letter to Mantell in 1817, she claimed her shell collecting had left her with no time to look at his fossils.

Her unusual first name caused many to suppose that she was a man. This mistake was detected when the Natural History Society of Moscow awarded membership to her under the name of Master Etheldredus Benett in 1836. This was evident again when she was granted the Doctorate of Civil Law by Tsar Nicholas I. This doctorate was given to her from the University of St Petersburg at a time when women were not allowed to be accepted into higher institutions.

Benett's contribution to the early history of Wiltshire geology is significant as she felt at ease with, and corresponded extensively with, fellow geologists such as George Bellas Greenough (the first president of the Geological Society), Gideon Mantell, William Buckland, and Samuel Woodward. She freely gave her ideas and items from her fossil collection to worthy causes such as museums, sending one to St. Petersburg. Through exchanging numerous fossils with Mantell, a thorough understanding of the Lower Cretaceous sedimentary rocks of Southern England was reached.

Her work was recognised and appreciated by notable individuals of the time. Mantell described her as "A lady of great talent and indefatigable research," whilst the Sowerbys note her "labours in the pursuit of geological information have been as useful as they have been incessant".

Benett produced the first measured sections of the Upper Chicksgrove quarry near Tisbury in 1819, drawn to scale, but unfortunately there is no scale indicated on the drawing. She called this "the measure of different beds of stone in Chicksgrove Quarry in the Parish of Tisbury". However, the stratigraphic section was published by naturalist James Sowerby without her knowledge. Later, she contradicted some of the Sowerby's conclusions based on her own research.

In 1825, her painting of the meteorite which fell on County Limerick in September 1813 was deposited in Geological Society of London archives, presented in the University of Oxford by Reverend John Griffiths of Bishopstrow. The meteorite is 19 pounds in weight, and the streaked and dotted part represents the fracture. Because of her extensive collection, she wrote and privately published a monograph in 1831, which contains many of her drawings and sketches of mollusca and sponges such as her sketches of fossil Alcyonia (1816) from the Green Sand Formation at Warminster Common and the immediate vicinity of Warminster in Wiltshire. The Society holds two copies: one was given to George Bellas Greenough, and another to her friend Gideon Mantell. This work established her as a true, pioneering biostratigrapher, following but not always agreeing with the work of William Smith.

Illness during the last twenty years of Benett's life meant she spent less time collecting specimens and instead commissioned local collectors. After spending 34 years gathering what was the most extensive collection of Wiltshire fossils, Benett died at her home, Norton House, at the age of 69, two years before fellow fossil collector Mary Anning. Her fossil collection was later sold to physician Thomas Wilson of Newark, Delaware, who donated the collection to the Academy of Natural Sciences of Philadelphia .

A catalogue of the organic remains of the county of Wiltshire, 1831.
A brief enquiry into the antiquity, honour and estate of the name and family of Wake, 1833 (written by her great grandfather William Wake, Archbishop of Canterbury, but prepared for publication and footnoted by Etheldred Benett)