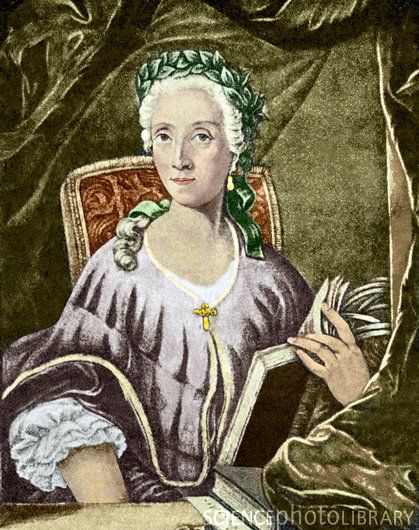 Born in Bologna into a wealthy family with a lawyer as a father, she was privately educated and tutored for seven years in her teens by Gaetano Tacconi, a University teacher of Biology, Natural History and Medicine. She came to the attention of Cardinal Prospero Lambertini, who encouraged her scientific work. She was appointed professor of anatomy in 1732 at the University of Bologna at the age of 21, was elected to the Academy of the Institute for Sciences in 1732 and, the next year, was given the chair of philosophy.

Bassi became the second woman in Europe to receive a degree from a university, the first being Elena Cornaro Piscopia in 1678 (in philosophy), fifty-four years prior. In her early years, her teaching opportunities were restricted to occasional lectures. Significance of her 1732 defence, degree ceremony, and first lecture at Bologna is that the events took place in the Palazzo Publico, a location significant to the governing bodies of Bologna. These events were attended by "not only the university faculty and students, but also by principle political and religious figures of the city-the Popal Legate and vice-legate, the Archbishop of Bologna, the Gonfaloniere, the Elders, senators, and magistrates. Additionally, 'all the ladies of Bologna and all the Nobility'." The Bologna community came to recognize the achievements of Bassi earning and receiving her degree. As a political figure, the Senate expected Bassi to attend various events. The Carnival Anatomy, a public dissection with tickets open to anyone, was an event she was expected to attend because it was a central feature of public life at the University which attracted the attention of many foreigners and important community members. She began attending this event annually in 1734.

In 1738, she married Giuseppe Veratti, a fellow academic with whom she had twelve children. After this, she was able to lecture from home on a regular basis and successfully petitioned the University for more responsibility and a higher salary to allow her to purchase her own equipment. One of her principal patrons was Pope Benedict XIV. He supported less censorship of scholarly work, such as happened with Galileo, and he supported women figures in learning, including Agnesi. She was mainly interested in Newtonian physics and taught courses on the subject for 28 years. She was one of the key figures in introducing Newton's ideas of physics and natural philosophy to Italy. She also carried out experiments of her own in all aspects of physics. In order to teach Newtonian physics and Franklinian electricity, topics that were not focused in the university curriculum, Bassi gave private lessons. In her lifetime, she authored 28 papers, the vast majority of these on physics and hydraulics, though she did not write any books. She published only four of her papers. Although only a limited amount of her scientific works were left behind, much of her scientific impact is evident through her many correspondents including Voltaire, Francesco Algarotti, Roger Boscovich, Charles Bonnet, Jean Antoine Nollet, Giambattista Beccaria, Paolo Frisi, Alessandro Volta. Voltaire once wrote to her saying "There is no Bassi in London, and I would be much hapier to be added to your Academy of Bologna than that of the English, even though it has produces a Newton". Francesco Algarotti wrote several poems regarding her degree ceremonies.

In 1745, Lambertini (now Pope Benedict XIV) established an elite group of 25 scholars known as the Benedettini ("Benedictines", named after himself.) Bassi pressed hard to be appointed to this group, but there was a mixed reaction from the other academics. Ultimately, Benedict did appoint her, the only woman in the group. During the 1760s, Bassi and her husband worked together on experimental research in electricity. This attracted talent of Abbe Nollet and others to Bologna to study electricity. In 1776, at the age of 65, she was appointed to the chair in experimental physics by the Bologna Institute of Sciences, with her husband as a teaching assistant. Two years later, she died, having made physics into a lifelong career and broken a huge amount of ground for women in academic circles.