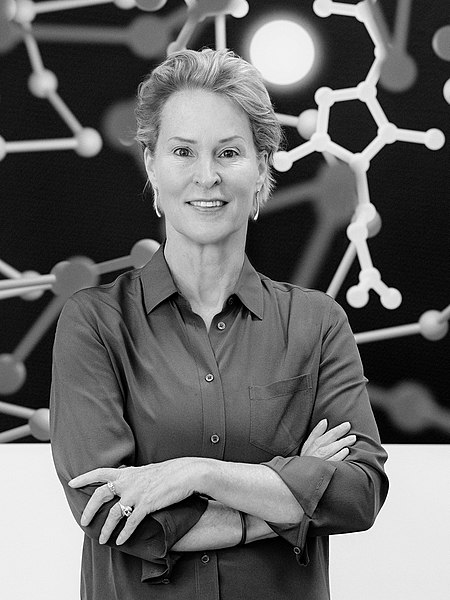 Frances Hamilton Arnold is an American scientist, engineer and Nobel laureate. She is the fifth woman to win the Nobel Prize in Chemistry after Marie Curie, Irène Joliot-Curie, Dorothy Crowfoot Hodgkin and Ada Yonath. She pioneered methods of directed evolution to create useful biological systems, including enzymes, metabolic pathways, genetic regulatory circuits, and organisms. She is the Linus Pauling Professor of Chemical Engineering, Bioengineering, and Biochemistry at the California Institute of Technology, where she studies evolution and its applications in science, medicine, chemicals and energy. She earned her B.S. in Mechanical and Aerospace Engineering from Princeton University in 1979 and her Ph.D. in Chemical Engineering from the University of California, Berkeley. There, she did her postdoctoral work in biophysical chemistry before moving to Caltech in 1986.

Arnold was born to nuclear physicist William Howard Arnold and grew up in Edgewood, Pennsylvania, a small suburb of Pittsburgh. As a high schooler, she hitchhiked to Washington, D.C. to protest the Vietnam War and lived on her own working as a cocktail waitress at a local jazz club and a cab driver.

Arnold studied mechanical and aerospace engineering at Princeton University, graduating in 1979 and went on to earn PhD in chemical engineering from the University of California, Berkeley in 1985. After graduating, she performed postdoctoral research at UC Berkeley and Caltech.

A member of the Advisory Board of the DOE-funded Joint BioEnergy Institute and the Packard Fellowships in Science and Engineering, Arnold also serves on the President's Advisory Council of the King Abdullah University of Science and Technology (KAUST). She is currently serving as a judge for The Queen Elizabeth Prize for Engineering.

In 2016 she became the first woman to win the Millennium Technology Prize, which she won for pioneering directed evolution. In 2017, Arnold was awarded the Raymond and Beverly Sackler Prize in Convergence Research by the National Academy of Sciences, which recognizes extraordinary contributions to convergence research. In 2018 she was awarded the Nobel Prize in Chemistry for her work in directed evolution.

She is co-inventor on numerous patents and co-founded Gevo, Inc. in 2005.

Arnold pioneered the use of directed evolution to design enzymes (molecules that catalyze, or speed up, chemical reactions) that perform novel functions and/or work more effectively or efficiently than natural enzymes. In nature, evolution by natural selection can lead to proteins (including enzymes) well-suited to carry out biological tasks, but natural selection can only act on existing sequence variations (mutations) and typically occurs over long time periods. Arnold speeds up the process by introducing mutations in the underlying sequences of proteins; she then tests these mutations’ effects. If a mutation improves the proteins function she can keep iterating the process to optimize it further. This strategy has broad implications because it can be used to design proteins for a wide variety of applications. For example, she has used directed evolution to design enzymes that can be used to produce renewable fuels and pharmaceutical compounds with less harm to the environment.

One advantage of directed evolution is that the mutations don't have to be completely random; instead they can be random enough to discover unexplored potential, but not so random as to be inefficient. The number of possible mutation combinations is astronomical, but instead of just randomly trying to test as many as possible, Arnold integrates her knowledge of biochemistry to narrow down the options, focusing on introducing mutations in areas of the protein that are likely to have the most positive affect on activity and avoiding areas in which mutations would likely be, at best, neutral and at worst, detrimental (such as disrupting proper protein folding).

Arnold was the first person to apply directed evolution to the optimization of enzymes; her seminal work, published in 1993, used the method to engineer a version of subtilisin E that was active in a highly unnatural environment, namely in the organic solvent DMF. She carried out the work using four sequential rounds of mutagenesis of the enzyme's gene, expressed by bacteria, through error-prone PCR. After each round she screened the enzymes for their ability to hydrolyze the milk protein casein in the presence of DMF by growing the bacteria on agar plates containing casein and DMF. The bacteria secreted the enzyme and, if it were functional, it would hydrolyze the casein and produce a visible halo. She selected the bacteria that had the biggest halos and isolated their DNA for further rounds of mutagenesis. Using this method, she designed an enzyme that had 256 times more activity in DMF than the original.

Following her seminal work, Arnold has further develeoped her methods and applied them under different selection criteria in order to optimize enzymes for different functions. She showed that, whereas naturally evolved enzymes tend to function well at a narrow temperature range, enzymes could be produced using directed evolution that could function at both high and low temperatures. In addition to improving the existing functions of natural enzymes, Arnold has designed enzymes that perform functions for which no previous specific enzyme existed, such as when she evolved cytochrome P450 to carry out cyclopropanation and carbene and nitrine transfer reactions.

Arnold has also co-evolved enzymes in biosynthetic pathways, such as those involved in the production of carotenoids and L-methionine in E. coli (which has the potential to be used as a whole-cell biocatalyst).

Arnold has also used directed evolution to design highly specific and efficient enzymes that can be used as environmentally-friendly alternatives to some industrial chemical synthesis procedures.

Arnold also uses structure-guided protein recombination to combine parts of different proteins to form protein chimeras with unique functions. She developed computational methods, such as SCHEMA, to predict how the parts can be combined without disrupting their parental structure, so that the chimeras will fold properly, and then applies directed evolution to further mutate the chimeras to optimize their functions.

Arnold's Caltech research is in green chemistry and alternative energy, including the development of highly active enzymes (cellulolytic and biosynthetic enzymes) and microorganisms to convert renewable biomass to fuels and chemicals.