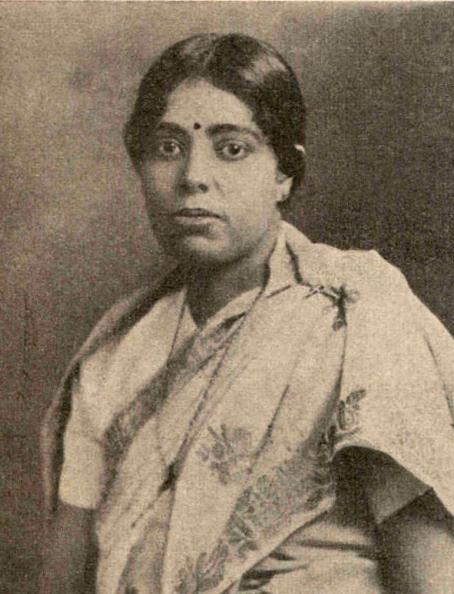 Main achievements: Her most notable work involves those on sugarcane and the eggplant.

Janaki Ammal Edathil Kakkat was an Indian botanist who conducted scientific research in cytogenetics and phytogeography. Her most notable work involves those on sugarcane and the eggplant. She has collected various valuable plants of medicinal and economic value from the rain forests of Kerala.

Janaki Ammal was born in 1897 in Tellichery, Kerala. Her father was Dewan Bahadur Edavalath Kakkat Krishnan, sub-judge of the Madras Presidency. Her mother, Devi (1864-1941) was an illegitimate daughter of John Child Hannyngton and Kunchi Kurumbi. She had six brothers and five sisters. In her family, girls were encouraged to engage in intellectual pursuits and in the fine arts, but Ammal chose to study botany. After schooling in Tellichery, she moved to Madras where she obtained the bachelor's degree from Queen Mary's College, and an honours degree in botany from Presidency College in 1921. Under the influence of teachers at the Presidency College, Janaki Ammal acquired a passion for cytogenetics.

Ammal taught at Women's Christian College, Madras, with a sojourn as a Barbour Scholar at the University of Michigan in the US where she obtained her master's degree in 1925. Returning to India, she continued to teach at the Women's Christian College. She went to Michigan again as the first Oriental Barbour Fellow and obtained her D.Sc. in 1931. Janaki is mentioned among Indian Americans of the Century in an India Currents magazine article published on January 1, 2000, by S.Gopikrishna & Vandana Kumar: "In an age when most women didn't make it past high school, would it be possible for an Indian woman to obtain a Ph.D. at one of America's finest public universities and also make seminal contributions to her field? The Kerala born Ammal was arguably the first woman to obtain a Ph.D. in botany in the U.S. (1931), and remains one of the few Asian women to be conferred a D.Sc. (honoris causa) by her alma mater, the University of Michigan. During her time at Ann Arbor she lived in the Martha Cook Building, a all-female residence hall and worked with Harley Harris Bartlett, Professor at the Department of Botany. She evolved a cross known as "Janaki Brengal", brengal being the Indian name for eggplant. Her Ph.D. thesis titled "Chromosome Studies in Nicandra Physaloides" was published in 1932.

After her doctorate Janaki returned to India to take up a post as Professor of Botany at the Maharaja's College of Science, Trivandrum, and taught there from 1932 to 1934. From 1934 to 1939 she worked as a geneticist at the Sugarcane Breeding Institute, Coimbatore along with Charles Alfred Barber. Her work during these years included cytogenetic analysis of Saccharum spontaneum as well as generation of several intergeneric crosses such as Saccharum x Zea, Saccharum x Sorghum. Ammal's work at the Institute on the cytogenetics of Saccharum officinarum (sugarcane) and interspecific and intergeneric hybrids involving sugarcane and related grass species and genera such as Bamboo (bambusa) were epochal.

From 1940 to 1945 she worked as Assistant Cytologist at the John Innes Horticultural Institution in London, and as cytologist at the Royal Horticultural Society at Wisley from 1945 to 1951. During this period she published counts of chromosome numbers in species such as Sclerostachya fusca. She is best remembered for co-authoring the monumental work, "Chromosome Atlas of Cultivated Plants" along with C. D. Darlington. The John Innes staff file notes a statement by Ellis Marks that "She smuggled a palm squirrel into the country and it was kept at J.I.I. for many years. Its name was 'Kapok'". She published chromosome counts in species of Rhododendron and Nerines.

On the invitation of Jawaharlal Nehru, she returned to India in 1951 to reorganise the Botanical Survey of India (BSI). She was appointed as Officer on Special Duty to the BSI on 14 October 1952. She served as the Director-General of the BSI.

Ammal made several intergeneric hybrids: Saccharum x Zea, Saccharum x Erianthus, Saccharum x Imperata and Saccharum x Sorghum. From then onwards, Ammal was in the service of the government of India in various capacities including heading the Central Botanical Laboratory at Allahabad, and was officer on special duty at the Regional Research Laboratory in Jammu. She worked for a brief period at the Bhabha Atomic Research Centre at Trombay before settling down in Madras in November 1970 as an Emeritus Scientist at the Centre for Advanced Study in Botany, University of Madras.

She lived and worked in the Centre's Field Laboratory at Maduravoyal near Madras until her demise in February 1984. Her obituary states "She was devoted to her studies and research until the end of her life." Aptly chosen lines from the Rig Veda that highlight her fondness for plants mark her obituary, "The sun receive thine eye, the wind thy spirit; go as thy merit is, to earth or heaven. Go, if it be thy lot, unto water; go make thine house in plants with all thy members "

During the years 1939–1950 she spent in England, she did chromosome studies of a wide range of garden plants. Her studies on chromosome numbers and ploidy in many cases threw light on the evolution of species and varieties. The Chromosome Atlas of Cultivated Plants which she wrote jointly with C. D. Darlington in 1945 was a compilation that incorporated much of her own work on many species. Ammal also worked on the genera Solanum, Datura, Mentha, Cymbopogon and Dioscorea besides medicinal and other plants. She attributed the higher rate of plant speciation in the cold and humid northeast Himalayas as compared to the cold and dry northwest Himalayas to polyploidy. Also, according to her, the confluence of Chinese and Malayan elements in the flora of northeast India led to natural hybridisation between these and the native flora in this region, contributing further to plant diversification. Following her retirement, Ammal continued to work focusing special attention on medicinal plants and ethnobotany. She continued to publish the original findings of her research. In the Centre of Advanced Study Field Laboratory where she lived and worked she developed a garden of medicinal plants. She also worked on cytology and ethnobotany.

As a geneticist working for the Royal Horticultural Society's Garden Wisley in the early 1950s, Dr. Janaki was investigating the effects of colchicine on a number of woody plants, including Magnolia, where a stock solution in water is made up and applied to the growing tip of young seedlings once the cotyledons (seed leaves) have fully expanded. Doubling of chromosomes occurs, giving the cells twice the usual number. The resulting plants have heavier textured leaves; their flowers are variable, often with thicker tepals, helping them last longer. As Magnolia kobus seeds were available in quantity, a number of seedlings were treated by Dr Janaki Ammal and ultimately planted on Battleston Hill at Wisley.

Ammal was elected Fellow of the Indian Academy of Sciences in 1935, and of the Indian National Science Academy in 1957. The University of Michigan conferred an honorary LL.D. on her in 1956. The Government of India conferred the Padma Shri on her in 1977. In 2000, the Ministry of Environment and Forestry of the Government of India instituted the National Award of Taxonomy in her name in 2000.