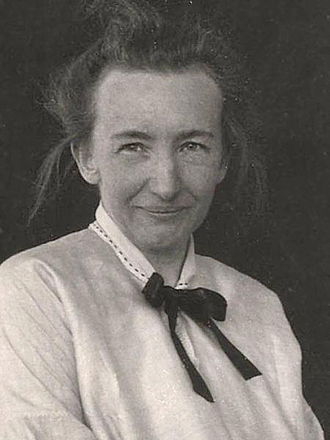 Tatyana Alexeyevna Afanasyeva (also known as Tatiana Ehrenfest-Afanaseva or spelled Afanassjewa) was a Russian/Dutch mathematician and physicist who made contributions to the fields of statistical mechanics and statistical thermodynamics. On 21 December 1904, she married Austrian physicist Paul Ehrenfest (1880–1933). They had two daughters and two sons; one daughter, Tatyana Pavlovna Ehrenfest, also became a mathematician.

Afanasyeva was born in Kiev, Ukraine, then part of the Russian Empire. Her father was Alexander Afanassjev, a chief engineer on the Imperial Railways, who would bring Tatyana on his travels around the Russian Empire. Her father died while she was still young, so she moved to St Petersburg in Russia to live with her aunt Sonya, and uncle Peter Afanassjev, a professor at the St Petersburg Polytechnic Institute.

Tatyana attended normal school in St Petersburg with a specialty in mathematics and science. At the time, women were not allowed to attend universities in Russian territory, so after graduating from normal school, Tatyana began studying mathematics and physics at the Women's University in St Petersburg under Orest Chvolson. In 1902, she transferred to University of Göttingen in Germany to continue her studies with Felix Klein and David Hilbert.

At the University of Gottingen, Tatyana met Paul Ehrenfest. When Ehrenfest discovered that Tatyana could not attend a mathematics club meeting, he argued with the school to have the rule changed. A friendship developed between the two, and they married in 1904, later returned to St Petersburg in 1907. Under Russian law, marriage was not allowed between two people of different religions. Since Tatyana was a Russian Orthodox and Ehrenfest was Jewish, they both decided to officially renounce their religions in order to remain married.

In 1912 they moved to Leiden in the Netherlands, where Paul Ehrenfest was appointed to succeed H.A. Lorentz as professor at the University of Leiden, and where the couple lived throughout their career.

Tatyana collaborated closely with her husband, most famously on their classic review of the statistical mechanics of Boltzmann. The Conceptual Foundations of the Statistical Approach in Mechanics, by Paul and Tatyana Ehrenfest was originally published in 1911 as an article for the German Encyclopedia of Mathematical Sciences, and has since been translated and republished.

She published many papers on various topics such as randomness and entropy, and teaching geometry to children.