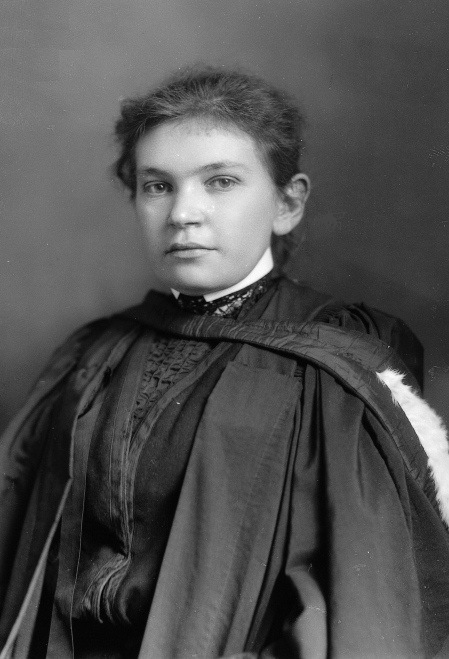 Maude Elizabeth Seymour Abbott was a Canadian physician, among Canada's earliest female medical graduates, and an internationally known expert on congenital heart disease. She was one of the first women to obtain a BA from McGill University.

In 1869, Abbot was born in St. Andrews East, Quebec as Maude Elizabeth Seymour Babin. Both of her parents were absent during infancy, as her mother had died and her father had abandoned her. With her sister Alice, she was legally adopted and raised by her maternal grandmother, Mrs. William Abbott, who was then 62. She was a cousin of John Abbott, Canada's third Prime Minister.

In 1885, she graduated from a private Montreal seminary high school.

Abbott was admitted to McGill University's Faculty of Arts, with a scholarship, even though she had previously been rejected and received her B.A in 1890. In 1894, she received her M.D., C.M. from Bishop's University with honours, and the only woman in her class. She received the Chancellor’s Prize, and Senior Anatomy Prize for having the best final examination. Later that year, she opened her own practice in Montreal, worked with the Royal Victoria hospital, and was nominated and elected as the Montreal Medico-Chirurgical Society's first female member. Some time afterwards, she did her post-graduate medical studies in Vienna.

In 1897, she opened an independent clinic dedicated to treating women and children. There she did much first-hand research in pathology. Much of Abbott's work concerned the nature of heart disease, especially in newborn babies. This would cause her to be recognized as a world authority on heart defects.

In 1898, she was appointed Assistant Curator at the McGill Pathological Museum, becoming curator 1901.

In 1905, she was invited to write the chapter on 'Congenital Heart Disease' for Dr. Osler's System of Modern Medicine. He declared it "the best thing he had ever read on the subject." The article would place her as the world authority in the field of congenital heart disease.

In 1906, she co-founded the International Association of Medical Museums, with Dr. William Osler. She became its international secretary in 1907. She would edit the institutions articles for thirty-one years (1907-1938).

In 1910, Abbott was awarded an honorary medical degree from McGill and was made a Lecturer in Pathology; this was eight years prior to the university admitting female students to the Faculty of Medicine. After a much conflict with Dr. Horst Oërtel, she left McGill to take up a position at the Women's Medical College of Pennsylvania in 1923. In 1925, Abbott returned to McGill becoming an Assistant Professor.

In 1924, she was a founder of the Federation of Medical Women of Canada, a Canadian organization committed to the professional, social and personal advancement of women physicians.

In 1936, she wrote the Atlas of Congenital Cardiac Disease. The work illustrated a new classification system and described records of over a thousand cases of clinical and postmortem records. The same year she retired from her professorial position.

On 2 September 1940, Abbott died from a brain hemorrhage, in Montreal.

In 1943, Diego Rivera painted her in his mural for the National Institute of Cardiology of Mexico City. She was the only Canadian, and the only woman depicted in the work.

In 1958, the International Academy of Pathology established the 'Maude Abbott Lecture'.

In 1993, she was named a "Historic Person" by the Historic Sites and Monuments Board of Canada and a plaque was erected outside the McIntyre Medical Sciences Building at McGill University in Montreal.

In 1994, she was posthumously inducted into the Canadian Medical Hall of Fame. In 2000, a bronze plaque was erected in her honour on the McIntyre Medical Building. In the same year, Canada Post issued a forty-six cent postage stamp entitled The Heart of the Matter in her honour.

McGill University Health Centre has also recognized Maude Abbott by naming their congenital heart defect clinic the “Maude Clinic”. The clinic has carried her name proudly for many years - originally at the Royal Victoria Hospital site and now continuing at the new M.U.H.C. Glen site.